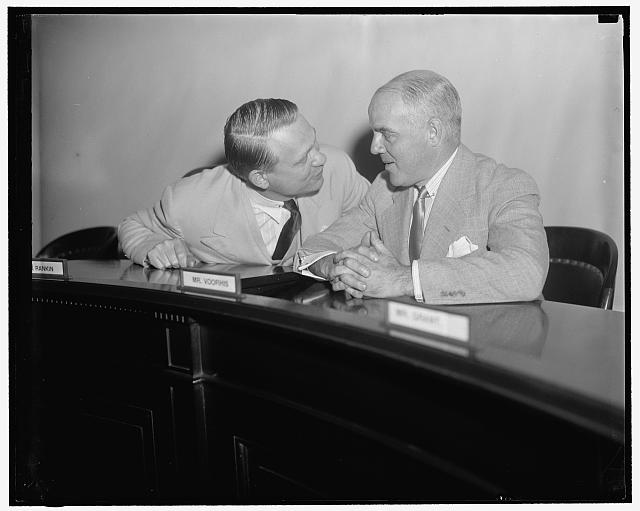 The House Un-American Activities Committee (HUAC) is synonymous with the congressional subversive hunts that marked the early Cold War. The committee traces its origins to 1934, when it was founded as a special committee to investigate alleged Nazi subversion, as well as Communists and domestic far-right groups. Disbanding after filing its report in 1935, the committee was reformed in 1938, and became a permanent House committee in 1945. HUAC reached its counter-subversive heyday from 1947-54, but became increasingly controversial as concerns mounted over its impact on civil liberties. Faced with growing criticism, HUAC was officially renamed the House Committee on Internal Security (HCIS) in 1969.

The CWIS Collection currently has over 700 volumes worth of HUAC hearings and other publications, covering the full range of its existence from 1934-1969. This includes such famous incidents as the "Hollywood Ten" hearings in 1947 that presaged the blacklist, as well as the 1948 Hiss-Chambers hearings on Communists in the U.S. government. Items of local interest include a 1956 investigation of Communist activity in North Carolina, 1958 hearings on Communism in the south, and a 1965-66 investigation of the Ku Klux Klan that reached Greenville and Pitt County.

Most HUAC items in the CWIS Collection can be found under the SuDoc Stem Y 4. Un 1/2, while the 1934 special committee publications have the stem Y 4. Un 1.

Courtesy of YouTube, newsreel footage of the famous 1948 HUAC hearings featuring Time magazine editor Whittaker Chambers and former State Department official Alger Hiss. Chambers, a former Communist and Soviet espionage operative, testified that Hiss was a secret Communist who supplied him with government information. Hiss denied the charges, but was ultimately convicted of perjury. Most historians believe that Hiss was likely guilty.

HUAC documents on the Hiss-Chambers hearings include: