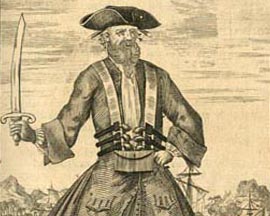 Image of Blackbeard the pirate as depicted in the book

General History of the Pyrates by Captain Charles Johnson.  Dated 1724.

For more images like this, visit the Joyner Library Digital Collections database.

Edward Teach, alias Blackbeard, "more than any other, can be called North Carolina's own pirate, although he was not a native of the colony... As is the case with all pirates, his origin is obscure. His name originally, it seems was Edward Drummond, and he began his career as an honest seaman, sailing out of his home port of Bristol, England. He is seldom known by that name, for after he became a pirate he began calling himself Edward Teach, sometimes spelled in the records as Thatch, Tache, or even Tatch. Yet it was as Blackbeard that he was, and still is, known, and it was under this name that the people of his generation knew him, 'a swaggering, merciless brute.'"   -- Hugh F. Rankin

This research guide contains information directing users to primary and secondary source materials about Blackbeard.  All materials can be found in Joyner Library's North Carolina Collection or electronically.

Users of this research guide will be able to: